As mentioned in a recent CU*Secure article, ransomware attacks have been on the rise over the last few years. Just recently, The National Security Agency (NSA)Â uncovered WannaCrypt, better coined as WannaCry – ransomware that locked down hundreds of thousands of computers across the globe. 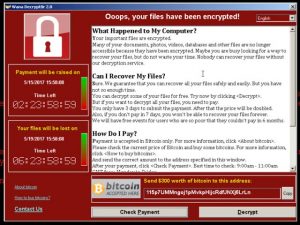 The hackers locked down files in over 150 countries, summing up to over 200,000 affected systems. The primary targets for these attacks were hospitals, government buildings, universities, and companies – not individual persons.

According to Talos Intellegence, when infected the virus asks the user to send $300 in Bitcoin within three days, doubling to $600 after. If the sum isn’t paid within a short time, the hackers threaten to wipe all the locked files. CNBC states there is no evidence of the hackers unlocking the files after the ransom is paid.

Thousands of companies were affected during the initial attack, including Nissan, FedEx, and the National Health Service (NHS), among hundreds of others, according to CNN.

Only computers with a Windows operating system are vulnerable to WannaCry. MicrosoftÂ posted a Customer Guidance solution to further protect Windows users from falling prey to the ransomware attacks. It asks users to update to the latest Microsoft security patch, back up important data externally, and to be cautious while opening emails and attachments.

Although declining, WannaCry is stillÂ attacking users across the world, with no permanent solution or fix for compromised systems.